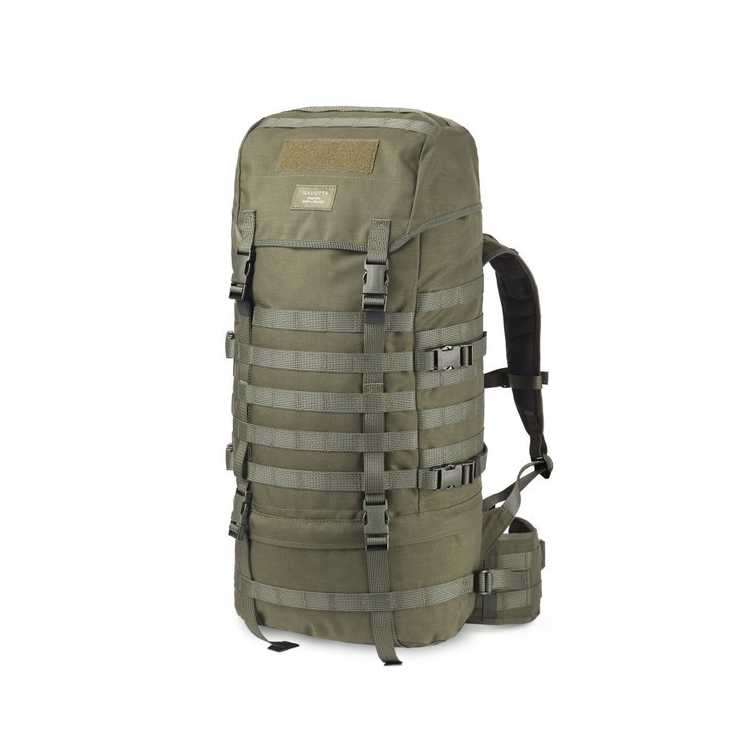 0108712
Technical specifications
Height: 60-80 cm
Width: 31 cm
Depth: 22 cm
Capacity: 40 - 60 liters
Lid capacity: 2 liters
Weight: 2.38 kg
Material: 1000D Cordura PU coated (100% nylon)
Frame: DUR aluminum.
Color: black, olive, M05 Camo
Warranty: 5 years
Description
Hunter L
The many detailed solutions and the extensive MOLLE system make the backpack a real modular and versatile tool. Due to its slim shape, the backpack is ideal for skiing and hiking in demanding terrain. Due to the stable frame system, the well-padded shoulder straps and the fixed hip belt, the border guard is also very suitable for heavy loads. The stable carrying system ensures that the backpack maintains its shape and the load is optimally transported to the hips so as not to overload the shoulders. Even if the backpack is not fully or poorly packed, the contents of the backpack can be optimally fixed by the compression straps - so that the load sits close to the body and does not wobble.
division
The border hunter's pack sack is relatively narrow, but also offers enough storage space for longer trekking tours. The main opening has an extremely watertight roll closure, which also enables "overpacking". With the help of the roll closure, the height of the backpack can be flexibly adjusted between 60-80 cm. The roll closure is closed with a 25mm buckle. The backpack opening has an additional normal lid which is secured with straps. The backpack lid is equipped with adjustable straps on both sides, so the height can be individually adjusted.
The main compartment of the backpack can be divided into an upper and a lower compartment (bottom compartment usually for the sleeping bag). The upper area contains a compartment in the back area which is closed by a Velcro fastener (28 x 50 cm) in which the aluminum frame of the carrying frame is also housed. This compartment can also be used to store a hydration system. In the upper area of the backpack there is an outlet for the tube of a hydration system. A loop over this compartment holds the contents such as a hydration system securely in place. The content of the bottom compartment is quickly accessible via an additional zip. With four side compression straps, the backpack can be optimally compressed even with only a small load. The compression straps have ultra-stable 25mm buckles and are long enough to attach additional bulky equipment to the outside of the backpack.
Recording system
None of our hunter backpacks is complete without a comprehensive MOLLE range. The MOLLE system is used by almost every armed force worldwide. The system was developed to work under almost all circumstances and is extremely robust. The border guard is one of the most flexible trekking backpacks thanks to the application of the MOLLE system. MOLLE applications can be found on the front, on the sides and on the lid - as well as on the shoulder strap and hip belt. With the help of the MOLLE system, almost any additional bag can be attached to the backpack
attached which has MOLLE. So there is the possibility to "tune" the backpack accordingly and expand it to a multifunctional carrying system for professional use. Every single MOLLE loop in our system holds a tensile load of
at least 100 kg.
Carrying system
The carrying system has been in use in our "Border Patrol" model for 25 years - the robustness and flexibility are repeatedly praised by the soldiers of the Finnish border guards. So we decided not to change the carrying system according to the motto: "never touch a running system". The carrying system is developed for really demanding circumstances and masters them in practice. However, the border guard has received completely revised shoulder pads, as well as a completely redesigned hip belt. Thanks to the complete inner frame construction, it is possible to carry the backpack optimally even in densely overgrown areas without getting caught. The wide, comfortable shoulder straps and the robust hip belt ensure optimal load distribution. The shoulder straps have a fixation for a drinking tube. All buckles on the backpack are extremely resilient and resistant to impact, frost and heat. The shoulder straps have load control straps - with the help of these straps the stuff sack can be brought closer to the shoulders or left further behind. The load control straps are also important to bring the pack sack quickly to your body in situations in which you are running or running in very demanding terrain. Of course, we have also not forgotten the chest strap, which ensures that the shoulder straps do not slip and stay in place. As a small addon, the shoulder straps have loops to accommodate smaller items of equipment.
The hip belt is very robust and has an additional cushion in the area of the lower back to ensure comfort, which can also be replaced or completely removed if necessary. The buckle of the waist belt is an extremely resilient 40mm buckle made of special plastic. The hip belt is tightened by simply pulling the straps forward - the hip belt can be loosened just as quickly. In addition, the hip belt has additional "angel wings" - this means that the pack sack can be brought closer to the waist belt and thus to the wearer in the lower area. The hip belt can also be completely removed and worn individually as a belt, additional tactical pockets can be attached using the MOLLE system. In addition, the waist belt can be attached in 3 levels and thus the backpack can be optimally adapted to the back length of the backpack carrier.
At the top of the backpack there is a simple handle that is long enough to be easily used by glove wearers.
Product Details

8 other products in the same category:

The rain cover protects the backpack (and the load in it) from moisture in heavy and constant rain. The size of the covers corresponds to the exact dimensions of the Wisport backpacks: 50-60 L, 60-75 L, 75-90 L, 100+ L Material: nylon

100% polyester, polyurethane coated Dimensions: 60 x 80 cm Available for volume sizes: up to 80 liters and up to 130 liters - Rain cover for backpacks or bags - protects against dust, sand etc. - adjustable to the backpack size by means of an elastic band and cord stopper